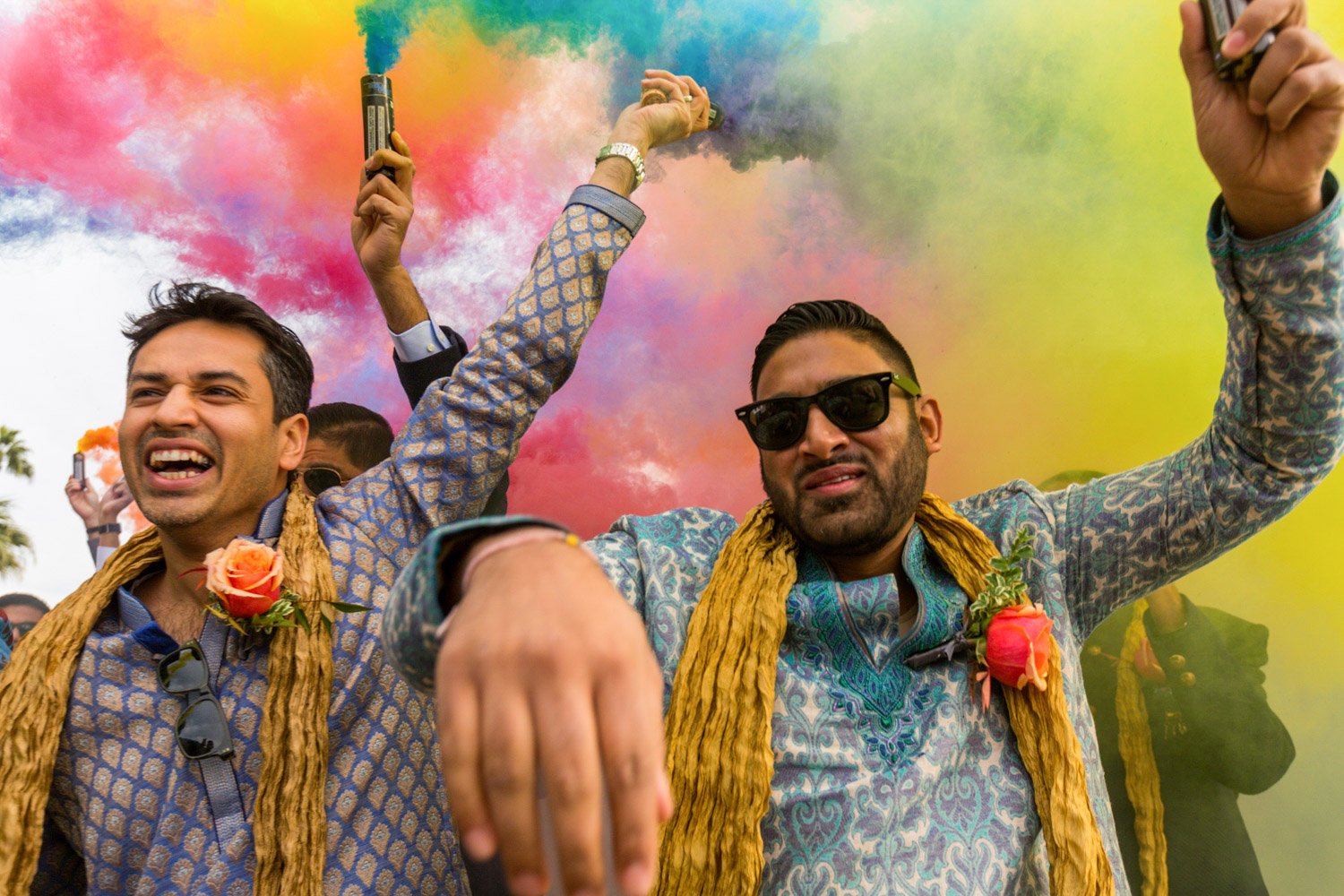 A baraat is one of the most exciting parts of any Indian/Pakistani wedding, and is essentially the groom’s extended wedding procession. Quite literally, the word “baraat” means “a marriage procession.” The baraat is performed in most Hindu weddings, in both Indian and Pakistani cultures.

Whether you’re participating, photographing a baraat, or interested in the tradition of the baraat, these photos and articles should give you a good sense of what to expect.

Think of the baraat as a mini parade, but where the guests are participants instead of the audience.

While most heterosexual, traditional, Western weddings concentrate on the bride(s), South Asian weddings have many more separate events, and give more time to devote to the bride, the groom, and the families of the couple. I’m a welcoming, LGBTQ+ wedding photographer and photograph couples of all religions and sexual orientations. For the purposes of this article, I will be referring to “the groom” and “the bride,” as that is most common in the South Asian culture in terms of my work experience. That said, I look forward to photographing an LGBTQ+ Indian wedding/Pakistani wedding as soon as that opportunity comes!

My nontraditional photography style and love for excitement are the reasons I absolutely adore running around and capturing the dancing, smoke bombs, horse moments, and—wait, did I say horse? Yes, yes I did.

Horses are a big part of any baraat, whether in the USA or in India. Tradition has it that centuries ago, the groom had to ride a horse for many days and nights in order to reach his bride. It was supposed to be an arduous journey, and a humbling one. This proved he was indeed ready for marriage. Today, it’s called an Uber. Oh I kid, I kid. The tradition of riding a horse into your baraat is quite alive and well. The only thing stopped it is venues not allowing horses, and as you’ll read below, there are other options!

Traditionally in baraats, the groom mounts his horse to start the baraat, but stays in the back while a crowd gathers up front. The groomsmen gather at the very front. Think of a parade, with the frontmost being a van playing music with massive speakers, and an MC (often bilingual in Hindi and English). Next is the Dhol player, or drummer. Then is the groomsmen, who will lead the spontaneous dancing and set the ton, followed closely by the groom’s parents. After that is all the guests, sometimes just men depending on the culture, sometimes men and women, and sometimes with bridesmaids, though often not. THEN, finally, at the very end is the groom on his horse (mare).

In most baraats I’ve photographed, the groom eventually wants to dance with his friends and groomsmen, so about 15-20 minutes in, he’ll dismount his horse, hand his sword to an assistant or wedding planner, and join the party in dancing. This is when the music gets TURNT. UP.

Basically, if you’re a Pakistani or Indian wedding photographer, you know to make sure to grab any portraits (even candid ones) of the groom on his horse in the very beginning, because they typically want to start dancing pretty soon after. Hey, it gets lonely in the wild, wild west.

This Rajasthani wedding in India had a massive baraat through the local town, but no dancing. What it DID have, however, was camels, blow-up Disney characters (don’t ask), and many days of celebrations starting at sunrise and ending far after sunset.

While some Indian weddings may not have a baraat, or may have two baraats (such can be the case with lesbian or gay Indian weddings), or may want to skip all the pomp and circumstance, many find that this is the time to turn things up a notch. Why have a horse when you could do something else?


Options for baraats that are not horses include:

-helicoptering in, as one of the grooms I photographed did in 2021!

-riding in a rickshaw

-coming in on a raised platform carried by the groomsmen

-riding an elephant in (not exactly ideal for animal activists, but it is done—especially in India)

-landing in a hot-air balloon


Basically, if you can dream it up, it can be done at an Indian wedding. The budgets are through the roof, the expectations are high, and the fun is palpable. But bring earplugs, because the noise level will also be wild.

How to photograph a baraat

As an Indian wedding photographer who adores photographing baraats, I’ve listed several few tips to help me capture the best possible images over the past decade+. I’ve photographed baraats everywhere from the USA to the Caribbean to India, and baraats are always a massive party. Sometimes there are 50 people involved, and sometimes there are hundreds or even thousands.

So, if you’re about to photograph a baraat, here are a few pointers.

1. Have a wide angle and MAYBE a slightly more focused lens (no more than a 70, I’d say). You’ll likely have people all around you and be squatting and running around, so carry one zoom or 2 that aren’t too long. I rarely use my long zoom while photographing baraats.

2. Don’t go it alone the entire time. Luckily baraats tend to be 20-45+ minutes, so you can capture some of the moments by yourself, then trade off with your second photographer or third photographer/assistant. There’s a lot of commotion and people jostling, so make sure you’re able to get photos without the videographers/drone/other photographers in your frame.

4. This is candid wedding photography and very much photojournalistic shots, not posed. Make sure you’re capturing all the action and are ready to get everyone there dancing, waving smoke bombs around, doing tricks, etc.

5. Approach the baraat with different angles, not just standard straight-on shots. Get below the action and shoot up at the groomsmen/dancers. Walk far away and get a group shot. Get right in the action, and use that fish-eye. These are fun portraits, not “pretty” ones! The more unusual, the better.

6. Remember to get in place for the post-baraat ceremony called 6. Have FUN! If you love being a photographer and love catching zany moments on the dance floor, you’ll be grinning throughout the baraat. It’s so much fun to capture the colors, the reactions, the celebration, the “worm,” and more.

Check out some of my favorite baraat photography shots from Indian (Punjabi, Sikh, Gujarati, etc.) and Sri Lankan weddings I’ve captured over the years. Since I’m a Cali and New York-based Indian wedding photographer, I most often shoot South Asian weddings in New York and New Jersey, but have photographed Indian weddings everywhere from Ohio to Arizona to California to the Dominican Republic to India itself!

Music for a baraat at an Indian wedding is very upbeat, drum-heavy, and fast-paced. The MC is typically very used to running the show, so you can leave the selection to them. Chances are you’ve heard all 3 of my favorites before!

Some popular choices for baraat soundtracks include:

After the loud baraat, the noise quickly subdues as the bride’s family (but not the bride yet—she is often still waiting upstairs and looking out over the crowd, somewhere) welcomes the groom through several rituals. This ceremony has many names, such as Jaan, Ponkhvu, Pokwanu, Agwaani, etc. depending on the specific regions and religion (traditionally Hindu or Sikh). Make sure to capture this very important head-to-toe ceremony as the crowd presses in.

Following the baraat and the welcoming of the groom to the family, everyone proceeds to the mandap (the decorated structure where the actual ceremony will be held, and things calm down and you have a moment to catch your breath. But trust me, after your first baraat, you’ll be so excited for your next. It’s so darn fun to be in one, attend one, or photograph one—you’ll never forget it! ~

Oh my goodness, this is so informative and lovely! I’ve always wanted to know more about Indian weddings and this was a great place to start!

Kathryn these are amazing. The explosion of color is so exciting. I feel like the images come to life when I look at them. The middle eastern and Indian cultures are all so expressive and colorful, I hope one day to just attend one! I think I’ll be in heaven. Count me in for the smoke bombs. Thank you for detailing what to expect at the procession and how to prepare for it. Awesome information.

Ahhh you are so welcome, Mitra! I’m glad these baraat photos came alive for you, and do hope you’ll get to attend a South Asian wedding one day soon!

What a beautiful wedding tradition! I love how you’ve captured it so candidly and you can really visualize how awesome this type of experience is! Great work and awesome tips for how to photograph a Baraat too!

This is an AMAZING resource, thank you so much for putting it together! So much I didn’t know, and I can’t believe how energetic your images feel, it’s so cool!

This is an amazing insight into what a Baraat is! Looks like a lot of fun and a crazy time to be involved as a photographer. Thanks for sharing!

This is so awesome! I hadn’t heard about a Baraat before and now I want to see (or photograph) one! I love your images and all of the great information you provided. Thank you!

I love how colorful indian weddings are. So full of joy and so vibrant. Great tips on shooting this moment, really helpful for someone who has not photographed any indian wedding yet 🙂