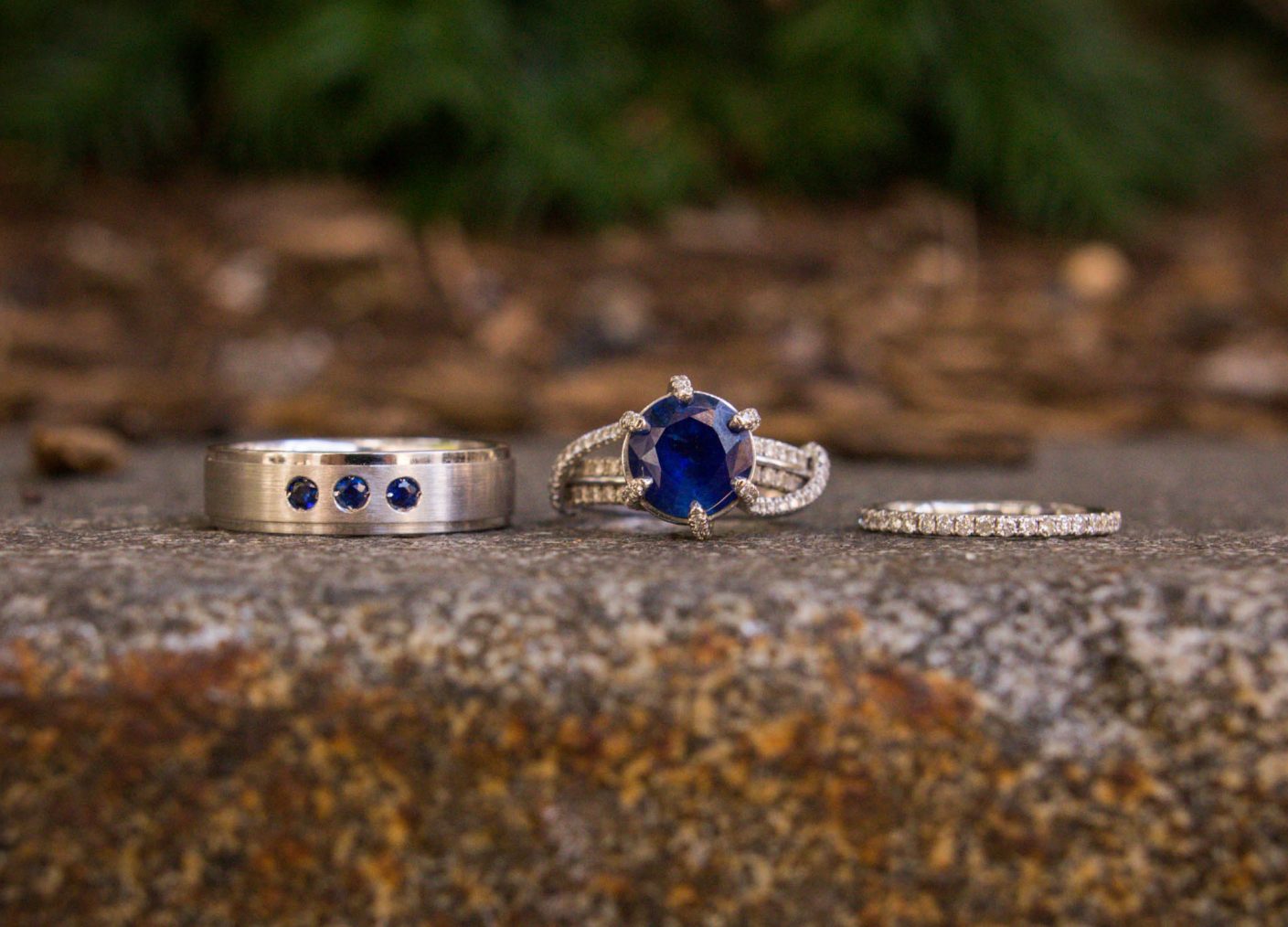 The most unusual, custom, one-of-a-kind engagement rings I’ve ever seen!

If you’re planning on getting engaged soon but don’t want your ring to look like everyone else’s…you’re in luck! It’s 2020, and there are no rules as to whom you marry, how you marry, or what type of ring you do (or don’t!) choose. But whether guy, gal, or they, here are some REAL, cool engagement rings from people all around the USA and beyond.

According to Wikipedia, The first well-documented use of a diamond ring to signify engagement was by the Archduke Maximilian of Austria in the imperial court of Vienna in 1477, upon his betrothal to Mary of Burgundy. This then influenced those of higher social class and of significant wealth to give diamond rings to their loved ones.

In fact, diamond engagement rings were only popularized through advertising. British-based company De Beers (you can never forget their tagline of, “A Diamond is Forever”) really created the high price and demand for diamonds worldwide, even though other gems and minerals are far more rare. Still, getting a diamond ring from Tiffany’s is considered the epitome of fancy, expensive rings.

Recently, grey diamonds, moissanite, white sapphire, and white topaz have been trendy as affordable/different alternatives for traditional diamonds. And more people than ever are buying Etsy engagement rings because…well, Etsy. But in 2020, sapphire engagement rings and other unique styles are becoming more popular. Though in reality, sapphires have always been under the radar!

“Every woman on my mom’s side of our family has had a sapphire engagement ring for generations. I always knew that was the ring for me.” So Augusta Gillespie Miller picked out this sapphire stunner from Ken & Dana Design in New York.

But what about people who don’t have the typical diamond solitaire, or who have a story attached to their jewelry? What about one-of-a-kind rings designed by independent shops, purchased while traveling, or created to meld families? What if you’re asking yourself, “How do I pick an engagement ring?!” Well, that I can’t necessarily help you with that (I’m willing to be your wingwoman, though), but a good place to start is by listening. People drop hints, I hear. I’m a creative wedding photographer, so I love unique and quirky. It looks like many others do too, so the first step is to figure out if you go ultra-traditional or unique. From what I’ve heard after speaking to hundreds of couples, it’s about the effort invested more than the ring itself.

Sentimental, meaningful, and one-of-a-kind is amazing, while spending months of your salary is not. cool. And to find out more, I asked a bunch of friends and strangers alike for unique ring photos and stories. I got through about half of the 60+ submissions I received before realizing I’ll need at least two posts to cover all the amazing stories!

So in no particular order, here are some of my favorite reader-submitted or taken-by-me unique engagement rings. I’m working on another post for awesomely offbeat custom-designed wedding rings, too! Thank you to ALL who submitted!

I don’t think I’ve ever seen a turquoise engagement ring, or any band that is inlaid like this! Lisette Catherine loves turquoise, so her fiancé had it custom-designed for her with the help of Jewelry Couture by Sehati, based in Ventura, California.

Mary Landreville received several rings and melded them into something quite unique. Her fiance’s great-great-grandmother’s ring was given to her, but was too fragile as a standalone ring. They took one of those stones and two new ones, and turned that into their engagement rings and wedding rings, along with alternating aquamarine and sapphire stones—their own birthstones. Definitely different!

What do bicycles and engagement rings have in common? Jenn Maurer’s husband is no jeweler, but he makes custom bicycles in Taos, New Mexico. Rings and bikes are the same thing, right? Not really at all, but somehow he was talented enough to collect a ton of old jewelry, melt it down, and create a (literally) one-of-a-kind piece for her! This is a true homemade ring, and I’m kind of jealous.

Nikita Pere’s own ring (right, with a rutilated quartz and one gold strand) is a combination of her mother’s actual band and her partner’s mother’s ring, melted down. But it’s her mother’s ring that grabbed my attention: Purchased in the mid-20th century, they still have the ORIGINAL World War 2 receipt for this sapphire beauty! It was purchased by her grandfather from a market in Ceylon (now Sri Lanka).

More and more are choosing ethically sourced diamonds from small retailers over big brands who can’t guarantee that their company doesn’t put employees at risk. You’ve probably watched Blood Diamond, so you can imagine a bit of what it’s like. As an ecologist, BryAnna Wertz cares about these things, and about sustainability in our world. So you can imagine that when her fiancé researched all this and ended up designing an ethically-sourced rose gold and teal sapphire ring (BryAnna’s parents have sapphire wedding rings themselves!), she was delighted. Plus, the metal is all recycled too. Beautiful job, Brilliant Earth!

Cerridwyn’s fiancé loves peridot—and it’s also her birthstone. Thus, they chose an ethically soured peridot-and-diamond ring for her. For Cerridwyn’s ring, she chose a unique rutilated stone. “I chose rutilated quartz because I wanted something that would remind me of the imperfections of love and people, and to remember to allow for grace in everything I do. It’s something as imperfect as ourselves,” said Cerridwyn. And wow…I think I’m in love with rutilated quartz now!

She proposed to him

It’s 2020, which means more and more gals are proposing to their guys! I actually have quite a few guy friends whose wives proposed to them, so kudos, people. Brittany Renate Cutshaw has a lovely salt-and-pepper diamond ring, but she proposed to him and got him a “management” ring first! It’s one of two awesome engagement rings with a good story to go along.

Kerry Hazel was surprised with this vintage-looking engagement ring. Her now-husband had it designed to have an antique look, and they used an oval diamond since it’s used less and less these days. Aren’t the leaves pretty?

A diamond solitaire with a twist

Lyssa Lynette wasn’t surprised by her engagement ring since she and her fiancé designed it themselves. The larger stone they picked, and the smaller stones were from her fiance’s mother’s original wedding set. The ring was custom designed by artist Jessie Kuruc in Los Angeles.

Sarah Carroll and her boyfriend had just moved when she received a text from him. It was a photo of a ring. She had no idea what it was or what it meant, and asked if he meant to send it to her. “OMG no it’s out of context…I’ll call you later,” was his reply. Perplexed and freaking out (in a good way), Sarah called her sister. Her sister, also in on it, pretended to know nothing. 2 hours later, her boyfriend told her to show up somewhere. FINALLY, he popped out with flowers and proposed to her right there. Apparently he wasn’t planning on proposing that day, but also couldn’t lie to her about it. “So technically,” says Sarah, “He proposed via text.” (By the way, Sarah is a planner for elopements and intimate weddings in New York’s Hudson Valley and the Catskills. Check out her company, Small Shindigs!)

Sarah Estrada’s now-husband surprised her with the only obvious fairytale wedding that could top Walt Disney’s—the actual inspiration for his castle! This proposal happened at Neuschwanstein Castle in Germany with a small tripod her husband set up. The tickets to the castle were a surprise, too, and the ring? In addition to other stones, there are two medium diamonds and 14 small diamonds on the bottom, signifying the date they met: 2/14. Yup, they met on Valentine’s Day! The sapphires are September’s stone, which is the month his parents AND his grandparents got married, so they’re following tradition. The ring itself is shaped like a tiara “because he calls me his princess, and, well, he proposed in front of Neuschwanstein Castle!” said Sarah. You can read all about the details of their unique proposal at https://howtheyasked.com/sarah-and-skyler/.

I photographed this proposal in NYC, and he claimed the Beatles ring was just a holdover one until he got the real one ready. But since his fiancé was from Britain and they love vintage everything…I kind of think they stuck with it.

Love diamonds, but want color? Diamonds come in nearly every color of the rainbow, so when Bliss and Kat proposed to each other on a custom trip in Morocco, they exchange pearl and diamond engagement rings. But not just any diamond ring! Kat was given a rainbow of diamonds around a center diamond, making for a very custom diamond ring. I cannot confirm nor deny that her cat pushed it down the drain at one point in time…(insure your rings!).

Diamond fit for a movie star

You can keep with diamond engagement rings (diamonds are my birthstone, y’know) and still do something stunning and one-of-a-kind. Jackie Boehling and her fiancé Jeff designed this stone with Pave Jewelers of Arlington, Virginia. The center stone is Jeff’s great-grandma’s from the early 1900s, and was a loose stone—making it easy to incorporate into a custom design. Though they planned out the whole cad, she never saw the final product until he proposed. What an incredible ring!

Ever seen a ring in the shape of a bow? I hadn’t either until Anniessa Burke showed me her bowtie-shaped custom ring. It’s a video so you can see all the intricate sparkles. Anniessa is also a bridal makeup and hair artist in Orange County, California, so she’s no stranger to the wedding world.

Christine and Karen proposed to each other within 2 weeks of one another, neither having a clue that the other was going to. While Karen’s ring was a more traditional diamond solitaire ringed with small stones, Christine’s was an aquamarine surrounded by small chocolate diamonds. Super unique (and yes, they were BOTH received well during BOTH surprise proposals). Also, I’m hungry now.

Which gorgeous, unique engagement ring was your favorite? I’d like to hear in the comments! I have a couple favorites myself, and some of you who know me well can probably guess. And what about my favorite stones? Why have I not seen an emerald engagement ring or a black opal proposal ring?!

If you have a unique engagement ring you’d like to see in my next article, email me at info@KathrynCooperWeddings.com! As I mentioned, I’ll be writing one on cool wedding bands as well, and already have a bunch of cool ideas to share with you. Until next time!

I loved all the stories, they make each ring look even more unique!

Some of these are just incredible! We’re not necessarily diamond people, but that sunburst is awesome.