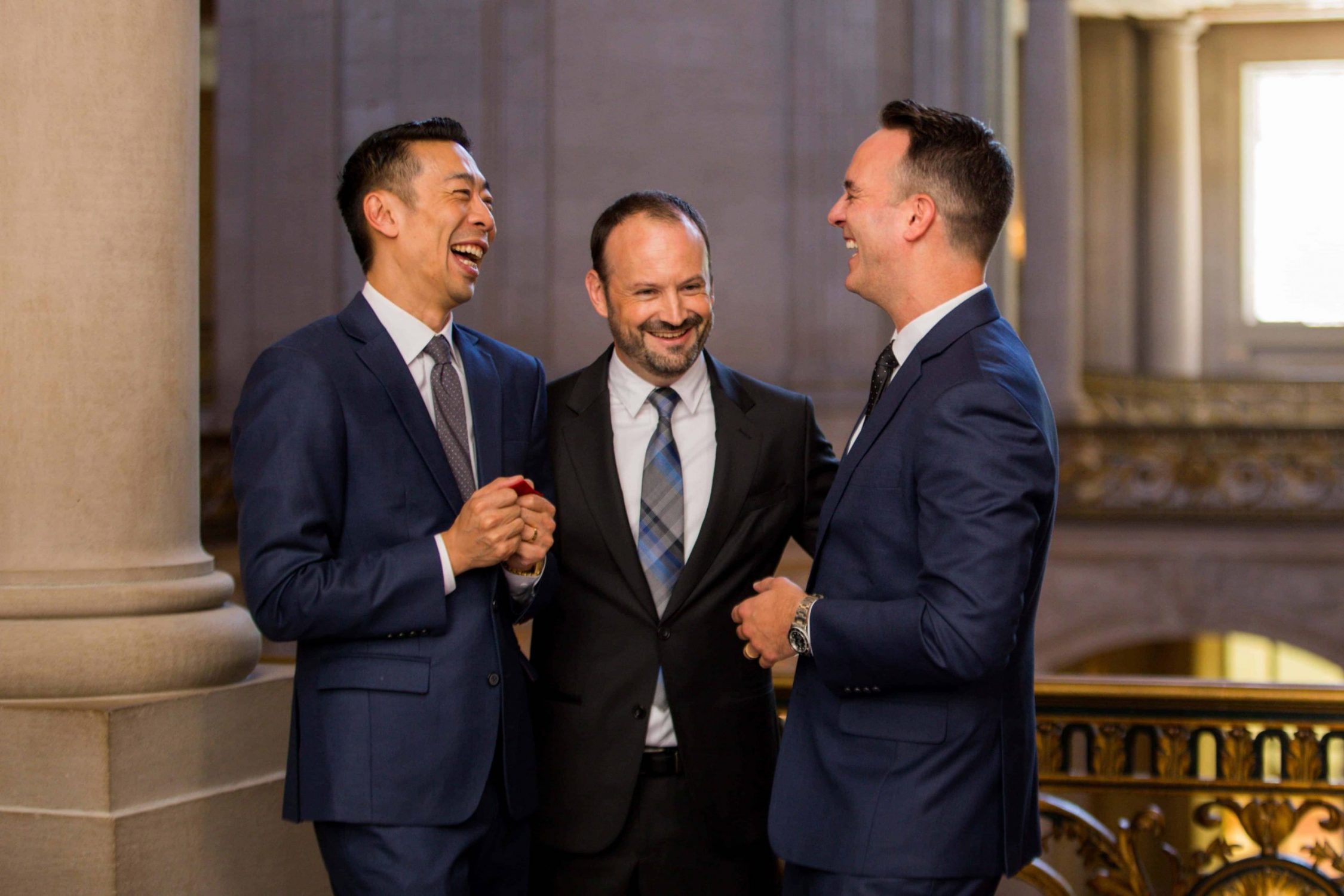 These two flew in from the Midwest to have their destination SF City Hall Wedding.
It was simple, classy, and perfectly intimate.

San Francisco, California holds a special place in their hearts. It’s the city where these two handsome men first fell in love, and as a gay couple, it’s a place of historical importance concerning gay rights. So it made sense for them to get married in a city and place they love, along with just a few family members.

An LGBTQ Elopement in the Heart of California

As both a New York and California elopement photographer, I’ve photographed ceremonies at many different city halls around the country. Without a doubt, California wins in every way possible. More space (of course), far more beauty, and such unique architecture. I’m talking about the indoors and cities, here. If we’re debating outdoor spaces, that’s for another time.

Back to the stars of the show: Edwaard and John. They got ready in their San Francisco Fairmont Hotel room and had me document them primping their matching custom suits they had made while in Thailand. P.S. If you haven’t been to Thailand…please go. I miss it so much!

Also, take a look at their custom rings! A few photos in the Fairmont, and then we were off to SF City Hall for their appointment.

To have a SF City Hall wedding, you’ll need to submit your documentation ahead of time. Due to COVID and general popularity, plan to submit at least 6 weeks in advance of your wedding or elopement date. For more information: https://sfgov.org/countyclerk/forms-documents.

You can choose to get married in the hallways for almost nothing at all (Around $100 for administrative fees, basically), on the top-floor balcony with amazing views (rental fee: Starting at $1000 for 1 hour), or on the bottom floor and majestic stairs of the massive 300-foot atrium, which means renting the entire city hall out (rental fee: $10,000-$30,000. Details on SF City Hall rental fees can be found here.). Since getting married in the hallways is “free,”…or no extra cost after your admin fees, 90% of couples opt to do it this way. Plus, if you’re having a City Hall elopement like John and Edwaard, there is no need to rent an entire space when it is just 2 or 10 of you. Interested in having me be your SF City Hall wedding photographer? You can contact me right here.

With their brother-in-law officiating (he was confirmed via the Universal Life Church, which is a perfectly legal way to officiate in the state of California), they said their vows through laughter and tears. Just look at these two!

Following their heartfelt ceremony, and upon finishing all their paperwork, we took more photos inside San Francisco City Hall, including on their grand staircase and intricate stairwells. There are tons of places to shoot here, but keep in mind that this was pre-pandemic, and that a LOT of people get married here—so getting a moment to photograph your couple with no one in the background is lucky and rare.

We all headed to the Palace of Fine Arts for John and Edwaard’s wedding photos. If you haven’t been, it’s another place you must go. Even if you aren’t very into architecture, you’ll love this San Francisco gem. The stately, magnificent domes and columns will have you in awe. The fact that they were built without modern-day equipment is mind-boggling, and I don’t think people could build something similar these days and pull it off so flawlessly. As a San Francisco wedding photographer, I LOVE taking my couples here.

For wedding photos, the Palace of Fine Arts is super popular–and with good reason. It’s centered around a lake with fountains, weeping willows, stones, ferns, the occasional accordion player, and many couples. But the truth is that hardly any of the prettiness matters because when you walk under the atrium, you’re just in awe. It truly is a beautiful place to take elopement photos or couples’ photos, and you’ll likely see a few people here doing just that. We walked around some of the grounds and took a few elopement photos in this quiet part of San Francisco, and then a few family photos as well.

And that was their oh-so-laid-back San Francisco city hall elopement! No fuss, no party–just the two of them and a few of their family members, there to celebrate in a most intimate way. The couple enjoyed the rest of their week in this city as their small honeymoon, then went home to start their new lives, officially, as Mr. & Mr. ~

This same-sex wedding was featured in Love Inc magazine: https://loveincmag.com/documentary-style-photography-city-hall-wedding-will-leave-tears/

About Kathryn Cooper Weddings: I’m a NYC and SF-based LGBTQ wedding photographer who captures destination weddings all around the world. I specialty is capturing fun, nontraditional, and adventurous elopements and weddings in New York, California, and beyond. I can be reached on my Contact page, or by emailing me directly: info@infokathryncooperweddings-com

Inquire about me photographing your elopement or wedding, and I'll get back to you within 24 hours. Cheers!

Absolutely beautiful. I wish you all the very best for the future.

Absolutely stunning in every way! This just goes to show courthouse weddings are not less… they can be just as spectacular as any other venue when done well!

I love their custom suits and rings, they look so happy! I really appreciate all the details and logistics of how to have a city hall wedding. The simplicity of getting married this way is so well paired with how architecturally beautiful the city hall is, and so well photographed!!

Beautiful!! Gorgeous photos of such a great day for these two! Love this and looks like it was such a great time in San Francisco! So glad they got to have the day of their dreams, simple and beautiful. 🙂 Love this!