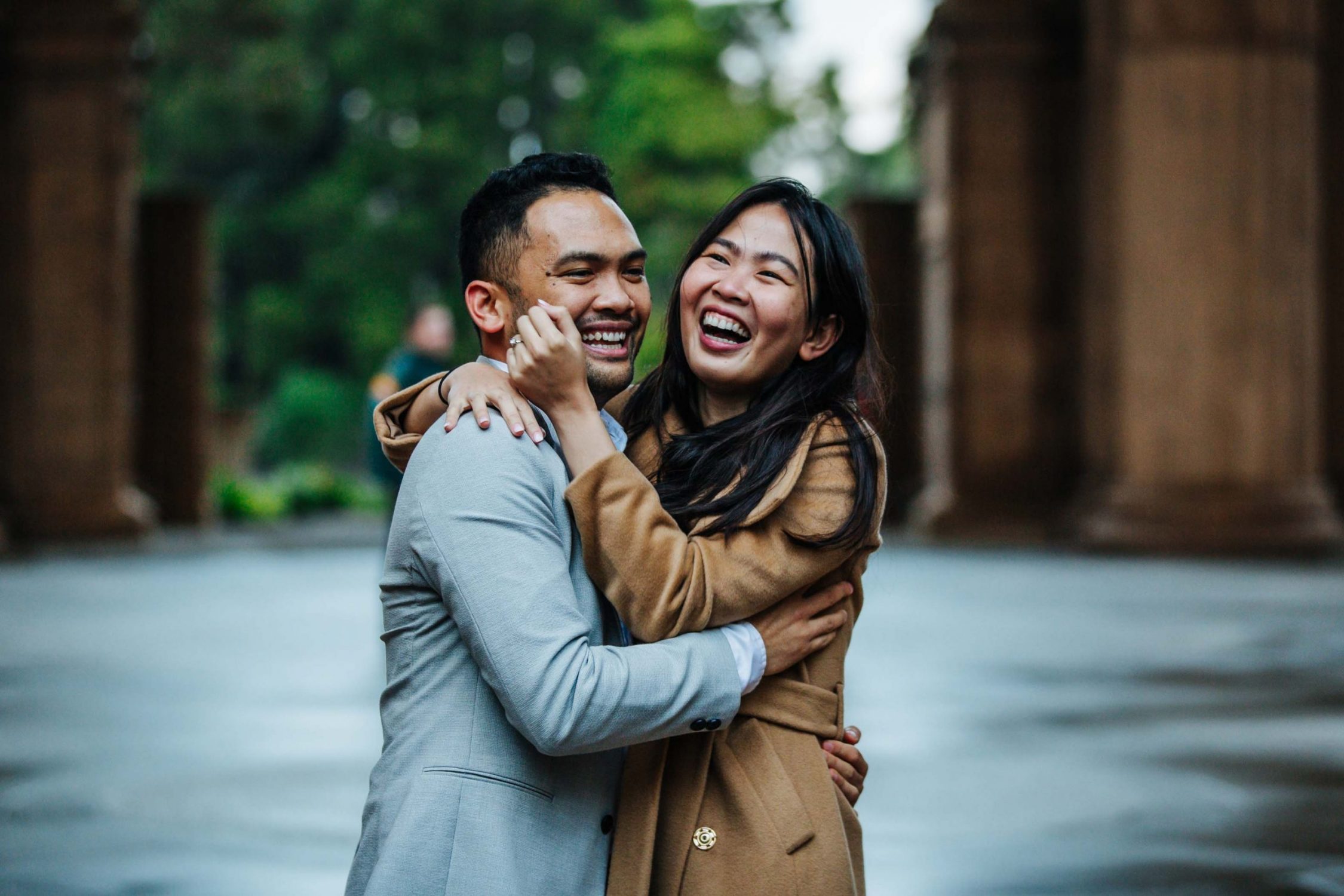 Despite the rain, this surprise proposal at the Palace of Fine Arts in San Francisco, California, went off flawlessly

I adore photographing proposals, and the day that Don had planned out for his bride-to-be caught her completely by surprise. It started with a day of mini dates (in the downpouring rain, of all things!), had a proposal in the middle, and ended with a shocked fiancé and a romantic dinner.

For Don’s proposal, he wasn’t alone. Wea’s cousin Daphne (and Daphne’s husband + son, who are very close with the couple) were in on the surprise, arriving early to set the stage. I captured the entire evening with my assistant, who acted as a “model” while I was secretly snagging photos.

After a day at the San Francisco Conservatory of Flowers, Don shared his location with us and made his way to the Palace of Fine Arts.

Daphne had set the scene with artificial tea lights and a heart made of red rose petals, and yes—people were staring! Luckily the palace was not packed, since the on-again, off-again downpours (see that puddle in the back of the photos?!) were not the most welcoming. And that was good, because Don definitely wanted to propose somewhere that screamed San Francisco (where Wea works), but that didn’t have people in the background. NOT an easy task in the city!

After strolling around, they came to the heart. Wea assumed they were interrupting someone else’s proposal, but Don really wanted to get photos of the two of them in the heart. HMMM…I WONDER WHY?!?! 😀

He wanted to take a selfie, but knowing that we couldn’t have the scene look like that, I stepped up and offered to take their photo in the rose petals. Hey, it just took a bit of improv! I put his phone down, put my camera up to my face, and he went down on one knee. Luckily, we were under the covered main dome of the Palace of Fine Arts, and the wind and rain stopped right as he proposed.

Wea was so shocked, I don’t think she even believed it was happening. She was overjoyed, but basically in a state of happy shock. It wasn’t until her cousin and cousin’s family popped out that she realized this was, indeed, real. After happy tears (or rain still falling?!), Don proposed again at the magnificent Palace of Fine Arts, now that Wea had her wits about her. A little rose toss later, and she finally realized it was real.

(And yes, every single rose petal was cleaned up. I practice Leave No Trace principals, and even if you’re not familiar with this practice, it makes sense to leave every place as you found it, and not leave even biodegradable rubbish for others to deal with.)

The fun part was that the rain stopped, Wea and Don’s fun sides came out, and we got to take photos at nighttime all around the palace. I’m a San Francisco wedding photographer, which means I take engagement photos all around California and worldwide. The PoFA is an amazing location for engagement photos, wedding photos, and San Francisco elopement photos—trust me! In fact, if you’re here for an hour, chances are you’ll see someone in wedding clothes.

With very few people at the PoFA at night, it was a perfect ending to a very surprising evening. In fact, since the proposal took place when it was already getting dark, we turned it into a nighttime engagement photo session by walking all around the park.

Nighttime Photos at the Palace of Fine Arts, San Francisco

FYI: The Palace of Fine Arts needs to be seen during the day, and I always recommend proposing during the daytime. At night, flash needs to be used, and that kinda, really, very much so gives away any surprise element. That said, you should definitely stick around until nighttime to see the Palace all lit up and beautiful! Walk all around this San Francisco architectural masterpiece if you have the time.

These two danced, talked excitedly, and geeked out together (they’re self-proclaimed zany people), and though Wea was delighted, I actually think Don was the wilder one! Both just chattered away, seemingly not noticing the cold (even though my fingers were borderline freezing).

The main dome, officially called the Palace of Fine Arts rotunda, is 162 feet in height.

It’s truly awe-inspiring, and if you walk across the lagoon, you can see the reflection at night.

We ended with photos here, and both of us said goodbye, excited to warm up and get some food in our bellies. My assistant and I got burgers while Wea and Done headed out for a romantic dinner date to celebrate (all pre-planned by Don). All in all, it was a delightful evening, and I was flattered to be able to capture such a genuine couple during their surprise Palace of Fine Arts proposal. He proposed. She said yes. The rain stopped, and we got beautiful photos to celebrate. What could be better?~

Ready for me to photograph your proposal or celebration?

Bloody love it! The Palace is such a beautiful location, and I’ve never seen night time sessions done as well as this. Stunning. I especially love the rose petals in the air (and the fact you practice LNT).

Loving the amazing architecture in these engagement photos! Such cool locations!!

Aww, this is such a sweet engagement! Love it.

What a beautiful proposal! I have yet to do one; and have yet to visit San Francisco. Thanks for sharing this beautiful gallery with us!

Surprise Engagements are so fun! I love these! The night photos are so cool!

I love proposals and this was so dreamy! The way you captured their joy in these photos makes me want to keep scrolling forever to enjoy even more!

This is an awesome gallery. Great story behind the proposal and some stunning photos, thanks for sharing!

Oooo love how you used light during the night time images! And I also really loved how you captured this couples goofy side 🙂

WOW! The Palace of Fine Arts is such a beautiful location, even in the rain! The rainbow just made it even more special of a day for them!

This is so cute and well done!

WHOA! These Nighttime Photos at the Palace of Fine Arts, San Francisco are amazing!!!!!!!