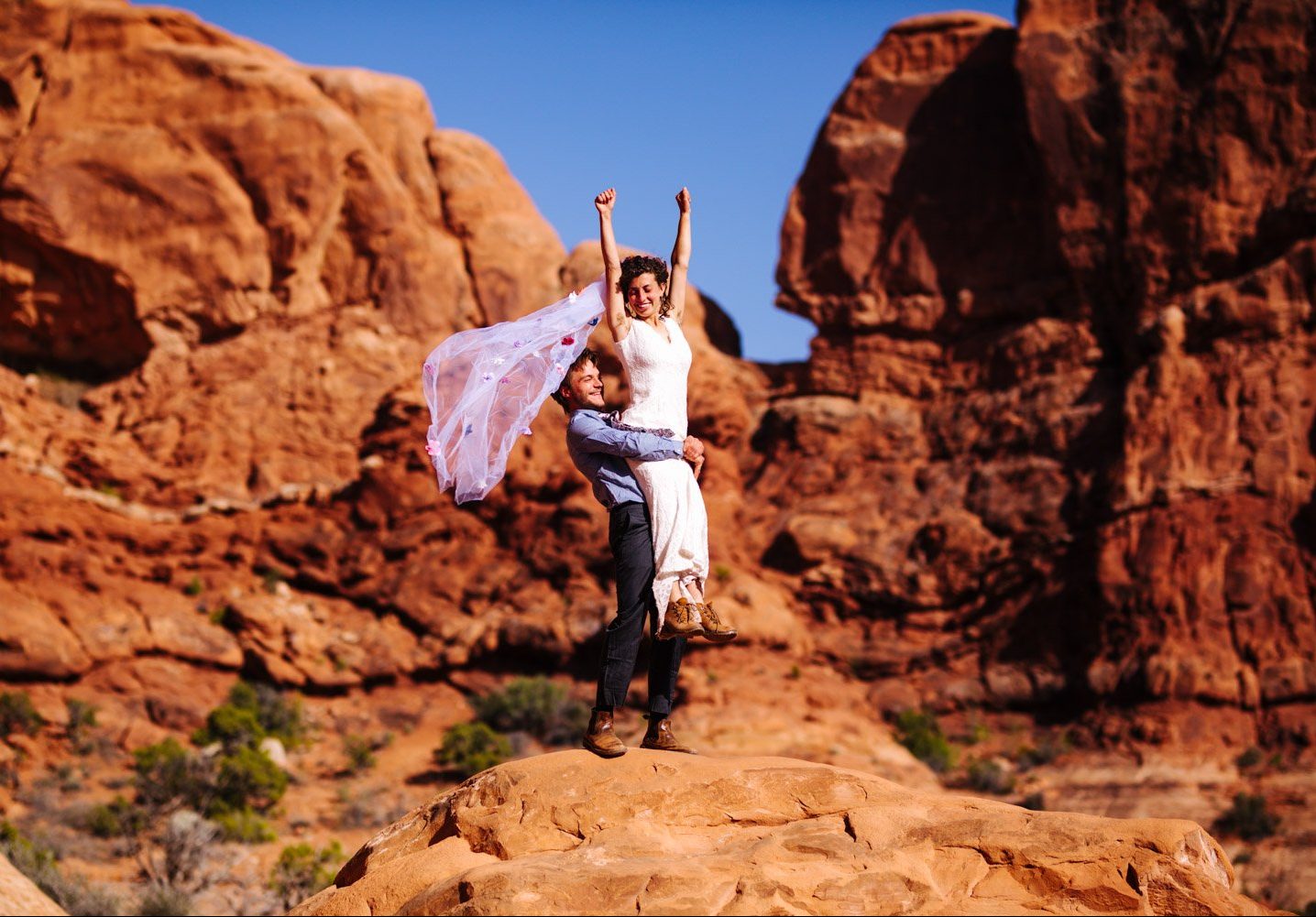 Eloping in Arches NP? Getting married in Moab? Or just wanting amazing Arches National Park wedding photos? Whatever your reason to celebrate, here’s your adventure inspiration.

Taking wedding photos in Arches National Park is incredible. Why, aside from the obvious? Because this national park has so many secret spots and little-known hiking areas that you won’t run out of ideas (if you know the locations!). One hint: Rent a 4×4. Not all-wheel drive, but 4-wheel drive. Yes, it makes a huge difference in the rocky, sandy, unstable roads Utah and Arches is known for.

That said, most people don’t have 4×4 vehicles, and since most couples getting married in Arches have at least 1 wedding dress on, hiking to a faraway location isn’t usually a feasible option. But not to worry—amazing Arches National Park wedding photos can be taken close to the main attractions! One of my favorite areas is Double Arches, where we took many of Elise & Paul’s adventure wedding photos.

If you’re planning to elope in Arches National Park and haven’t yet visited, don’t worry: You’ll love it here. Photos don’t do it justice, since there are interesting rock formations, mountain, vast spaces, arches, crazy places to scamper and climb, caves, and so much more here. It’s really 360 adventure, and the activities offered in Moab will never allow you to be bored.

Before I go on, it’s important to know that although Moab, Utah in general, and especially Arches NP appear to be just desert, there are very vital microorganisms in the knobby, black crust called cryptobiotic soil (or “crypto” for short) that thrive here, and only here. Even if there appear to be trails leading off through the scrub, tread carefully and try to stay on rock. Follow LNT principles. And when in doubt, ask a local or a ranger. Thought I’m not a Moab local (I’m a destination wedding photographer and destination elopement photographer), I’m very familiar with working in the area, and have friends and colleagues here who have taught me what to look for over the years.

Almost all times of the year are great for photos in Arches, though be warned that in the height of summer, it can be terribly hot. Winter here is an awesome time to elope in Arches National Park. There are very few crowds, and the orange rocks dusted with white snow is quite unique. Just dress warmer than you’d think since there’s little protection from wind!

Taking wedding photos in the parks around Moab, Utah is no different from most outdoor locations, in that the earlier or later in the day, the better. Why? Crowds, crowds, crowds. Sun. Flattering light and angles. Shadows from the rocks.

One great thing about Arches, however, is that almost any time of day is great for photos here. This is because the changing shadows and lighting from the many high rock formations create an ever-changing landscape for fun photo play. So don’t stress timing here too much! Just know the colors of the rocks change frequently, depending on the sun, clouds, and weather. Even during our wedding photoshoot, the rocks ranged from orange-red to mauve to peach.

Eloping in Arches NP is popular because of the many unique spots, unlimited choices, views of the snow-capped peaks in the background, and ease with getting there straight from town. And if you have your National Parks Pass, you can camp for free on lots of park of BLM land very nearby.

For Elise & Paul’s Arches National Park wedding photos, we chose the very popular Double Arch and a few additional locations. As is with most places in the park, if you venture off just a wee bit further than most people (practicing carefully treading only on marked trails and rock), the crowds just disappear. We got so many delightful images of their joy and celebrating.

NOTE: Word through the grapevine is that Arches NP may start regulating elopements and weddings at the park soon, allowing just a few photoshoots per week. Why? Apparently couples, guests, and crews are not practicing Leave No Trace methods, and park guests are complaining. If this strict permitting process goes through, it will be very difficult indeed to elope in Arches National Park—and other similar places in Moab that are equally stunning. So until then, don’t spoil it for everyone. Tread carefully, even if it means you can’t get that shot you so want to get. We must respect the fragile landscape of this awesome place!

Along with my assistant, the four of us met up at the next spot and some very different shots—this time with the two of them scampering up the rocks and enjoying the view of Balanced rock and the La Sal Mountains.

For much of the time, Elise donned a flower veil I made during the pandemic. You may have seen it from other shoots on my page, because brides like this bridal piece I’ve made! Honestly, these two would look cute in ANYTHING, but the colored flowers in her hair really added a cute something extra.

Eloping in Moab is Awesome.

The beauty and uniqueness of this park is exactly what makes weddings and elopements here so darn amazing. From several secret viewpoints in the park, you can have a vista of various famous arches, unique forests, little offshoot roads, hoodoos, and more. There’s quite a variety here, and that’s why I hope people can respect the land and also still be able to celebrate in this stunning park. The park is so crowded, in fact, that there’s now a reservation rule in effect for timed entries. I was lucky enough to have photographed during the pandemic here, and even with the Arches reservations system in use, able to avoid the crowds via camping in the park.

Where will you have your Arches National Park wedding photos done? I have tons of little-known spots around here and Moab, so if you’re ready to adventure, I’ll photograph it all~

I love the way how you click the photos, it’s unique and amazing. And Arches is one of the best locations to take photos and to get married. Thanks for sharing such an amazing article with us, keep updating us.

Beautiful photos in one of my very favorite parks!! Literally such a cool place for an elopement!

Utah has so many beautiful destinations and this blog is definitely moving Arches National Park to the top of my list – such an amazing place to plan an adventure elopement!

Arches NP is such a beautiful location for an elopement. It really gives off the adventurous vibe, and the landscape is breathtaking.

Ouh moab never disappoints even when visiting via photos. Also the sunshine and love was captured beautifully!

Arches is such an incredible location to get married! Wow! What an amazing day.

Ready for me to photograph your celebration?